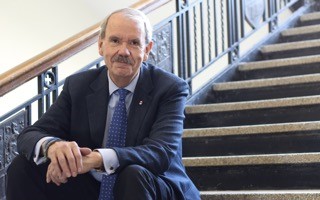 The ACQL is pleased and honored to announce that D.M.R. Bentley, Distinguished Professor of Canadian Literature, will be one of our plenary speakers at the June 2020 annual conference at Western University. The title of his presentation is “Archibald Lampman and Islamic Culture.”

“Modern life is vast and complex, and the poet often finds that such primary feelings as belong to all ages and places may be dealt with more freely and with a sharper accentuation, when they are wrought upon a background of ruder and simpler custom.” This apologia for Pre-Raphaelite medievalism by Archibald Lampman applies very well to an almost entirely neglected group of his works that use medieval and Renaissance Islamic culture as a “background”: a ballad (“A Spanish Taunt”) and an untitled fragment of a novel both set near the beginning of the Reconquista of Spain, and three poems – “Abu Midjan,” “Baki,” and “The Vase of Ibn Mokbil” – set in earlier phases of Islamic culture. By situating the five works in the contexts of Romantic-Victorian Orientalism, their sources in such works as Washington Irving’s Chronicle of the Conquest of Granada (1829) and Al-Makkari’s History of the Mohammedan Dynasties in Spain (1840, 1843), Lampman’s growing hostility to aspects of Christianity, and the loathing of avaricious individualism that took him to socialism, the paper will uncover a hitherto hidden and important aspect of one of English Canada’s most accomplished and enduringly relevant nineteenth-century writers.

D.M.R. Bentley is a Distinguished University Professor and the Carl F. Klinck Professor in Canadian Literature at Western University in London, Ontario. He has published widely in the fields of Canadian literature and culture and Victorian literature and art, and on the importance of the Arts and Humanities in society. His publications include Mimic Fires: Accounts of Early Long Poems on Canada (1994), Mnemographia Canadensis:  Essays on Memory, Community, and Environment in Canada (1999), The Confederation Group of Canadian Poets, 1880-1897 (2004), Canadian Architexts: Essays on Literature and Architecture in Canada, 1759 -2006 (2009), By Necessity and Indirection: Essays on Modernism in Canada (2015), and, on Archibald Lampman specifically, Fairy Tales (1999) Untitled Fragment of a Novel (2014), and Scribe: Archibald Lampman and Episkopon. A Facsimile Edition (2015). In 2015 he was awarded the Killam Prize in Humanities.